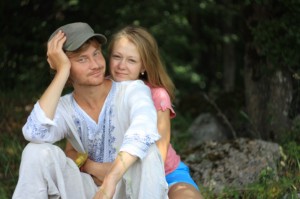 Five thousand miles separated us. We walked towards each other for a long interesting roads. Sometimes the distance between us was quite small, sometimes we were in the same places at intervals of two to three months. Met and parted with very different people, and they even drove us to each other.

But then something changed … Increasingly, we were close. Thousands of miles at times reduced to a couple of meters of one kitchen. We continued to meet, reducing the distance and time.

“… we did not know each other before this summer, we hung out around the world in the land and in the water …”

Nikita [writes Nastia] – the Captain on the earth and on the “ship”. Being an independent artist, he easily takes a variety of things (from programming to building :)), and his composure and responsible approach can bring them to the end of quality. Nikita started traveling at the institute, he likes to free-ride, surfing, paragliding and all new.

Nastya [writes Nikita] – a creative person. Her abilities manifest in everything from cooking to thinking out of style and color scheme of the room. She loves all living things. She was not even afraid of cockroaches. You can often find her cuddling with dogs, cats, horses and other animals. Loves to travel and see the beauty in everything around.

And now we have our common dream – the dream of traveling around the world, and we are ready to take it!

2 thoughts on “About us”