Uxmal, (Uxmal) is one of the most interesting and unusual ruins in Mexico, where we visited. There are no crowds here are prohibited from selling souvenirs on campus, so you will not harass and distract the merchants.

Uxmal is considered the most spectacular Maya city, constructed in the Puuc style of architecture. Much remains hidden in the jungle. So, we have found, for example, the Temple of fallosov, to which you want to go on an overgrown path through the rain forest.

Among interesting facts known: British Queen Elizabeth II visited Uxmal February 27, 1975 year in honor of the opening of the attraction of the show sound and light. At a time when sounded on tape recorded prayer to the God of rain, Chuck broke out a sudden torrential downpour in spite of the fact that the ceremony conducted in the middle of the dry season.

We entered the Uxmal already towards evening, around 4:00. "Infiltrated" because it was a holiday and all the local admission free. But they themselves do not know, just them in the window the cashier to return back the money, type of delivery, and stood on the tickets price: 0 pesos. To foreigners is not covered, and our daily budget we have spent back in Merida. About the technical part of the archaeological complex hit I'll cover in another article, where along the way will tell you more about getting into the Chichen Itza. In the meantime, some photos of the Ušmali: 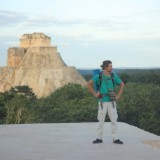 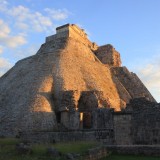 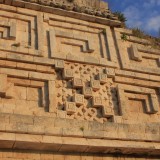 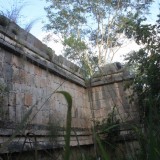 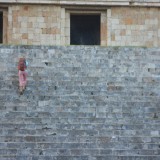 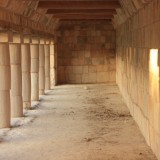 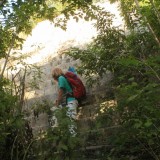 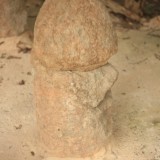