In this article we will describe how to get a visa United States in Moscow. But first, give some harmful tips:) In order to not get a visa in the United States, with a few mandatory items:
1. You should not be real estate, movables, continuous work. Your income must be below the subsistence minimum in $ 1000. You must not remain children and relatives in Russia. In General, you should keep at home.
2. When filling in the form please write more facts that exaggerated do not correspond to reality.
3. You must be friends and relatives in the United States. And more!
4. Talk to a consular employee in the purest English.
5. The most important thing! More vrite and are rude when talking with the United States Consulate employee.

Everything! Finish. Almost 100% that your visa application will be refused. 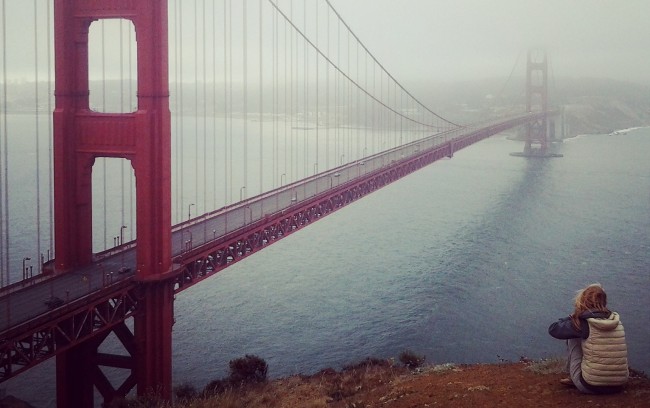 Nastya and the famous Golden Gate Bridge in San Francisco

What was with us?

About three weeks ago, we made the following in the list:
1. Studied http://cdn.ustraveldocs.com/'s official website and the steps that you need to pass. Read the experiences of other people. Amazed at the number of refusals of visa.
2. Paid consular fee of $ 160 (5440) to every person through the Telebank Vtb24.
3. About 4-6 hours were spent on filling in the questionnaire. And when filled out a questionnaire on Nikita, there were more issues (education, work, travel experience). When filling out a select Russian language. Photo you can upload almost any. But it is better to go to the photo shop and make an electronic copy. Because If the photo is wrong, before interview you will be asked to make a correct picture.
4. Signed up for an interview in Moscow on this page. Then abolished and assignments at a later date.
5. Left for Crimea for 10 days.
…
6. Did extract from the accounts. I must say that it is not needed at the interview.
7. Because my old passport for 5000 km, then printed on all pages in the printer.
8. Came at the appointed time to the Consulate with printouts confirmation statements. Saw a small place. Once inside, found that rent storage can only be camera phones. That is why Nastya ran away to hide in the bushes miniature folding knife (the path of people fled with wires, cameras, players …)
After the search and registration, we have issued a ticket and told the steps how to get visa to United States. Held in the queue for about half an hour, when someone is called to the next window. There we were told to do a new photo because those that we have downloaded the form incorrect. And we went across the street to do urgent photo for 250 USD.
Back, got a new tag, we see the new queue, were fingerprinted and it is most interesting: turn for an interview. So many different people! Vaughn meant the guy that with all the Windows spoke English, refused. Gone sad. Girl rides on competition-approved. Aunt rides remembering, because previously toured the United States, children remained in Russia-endorsed. A married couple, with the purpose of tourism-leave happy without passports.
I want to say that all the conversations heard those who sit in the Hall in the queue, although some booths and fenced off from each other.

So, our turn came. American with a strong emphasis on Russian language.
-Hello.
-Good day.
-Your purpose of visit?
-Tourism, we have a trip around the world. In America are going to spend a month in May.
-Whom do you work?
-Freelancers.
-You can have your old passport? In what countries have over the last couple of years?
-Your relatives in Russia?
-Yes.
With wedding-Congrats! It was recently?
-Thanks! :)) (All smile)
-Congratulations, your visa is approved. You get a passport in the pony express in a few days.
-Goodbye.

We joyfully embrace! Still were ready for different variants of development of events. To go out, pick up the phones, skladišok from bushes. And, smiling, standing under a drizzling autumn rain to Metro:) Who say how easy it is to get a United States visa in Moscow will not believe!

Be honest and relaxed in an interview. The main part of this depends on how to host a conversation with a consular officer. If you do the opposite conditions described at the beginning, as did not get a visa in the United States, all goes well. Good luck to you! 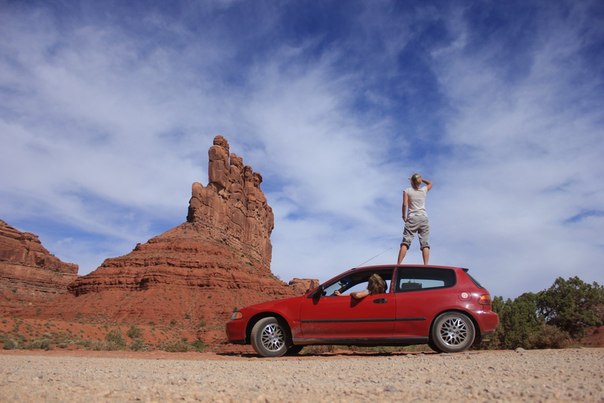 Nastya on the roof of our Civica in United States

Cost for two people came out:

If you do not hunt or difficult to obtain a visa on your own, get help from the company VisaToHome is an unparalleled online service which enables you to simplify visas for citizens of the Russian Federation. The company cooperates closely with international service-visa centers of 19 countries and regularly expands its visas.
From the client is only required to collect the necessary documents, photograph them and send them all the other visa issues they decide themselves.

p.s.: and we need to get a passport and be ready for a new conversation, but already after customs officer's permission at the border with the United States. They say that there too, sometimes excluding those who hit or not hit in America.

P. p. s: 1 April we flew to Hawaii and from there to California and car journey through the United States! :)

Watch a short video summary of our journey through the United States: